The first European settlers who began starting civilizations in America thought they had the entire land to themselves. They had the ship ports in the North and the rich soil for growing in the South. But as more and more Europeans were introduced to the new American land, problems with the original inhabitants, the Native Americans, began to arise. The Natives at first were pretty peaceful with the Europeans. Treaties were signed to give the Europeans tribes' lands. This changed as the European population rapidly increased. Instead of signing treaties with the Natives to gain possession of land, the new settlers just took land from the Natives. This created major conflicts between settlers and Natives and created a roadblock for the settlers who were looking to expand the territory of America. The desire to expand the country's boundaries were especially strong in the South. This was due to the fact that cotton planters wanted more land to grow their land, which would result in a bigger profit.


The desire for more land had taken over the entire country. States began to pass laws and policies that basically forced Natives to move from land twenty seven years before the Indian Removal Act was actually passed. These policies gained more ground after Andrew Jackson was elected president in 1828. Jackson had visions of America expanding beyond the Mississippi, but many Indian tribes were not permitting that. So, the Indian Removal Act of 1830 was passed. Under the Indian Removal Act, the president held the power to sign treaties with tribes in order to cede land to the country. The Natives, now forced off their own land and basically homeless, were forced into "Indian Territory" located to the west to the Mississippi. The Natives weren't so excited about having to relocate to western lands. After all, the land they were previously living on was ancestral land. 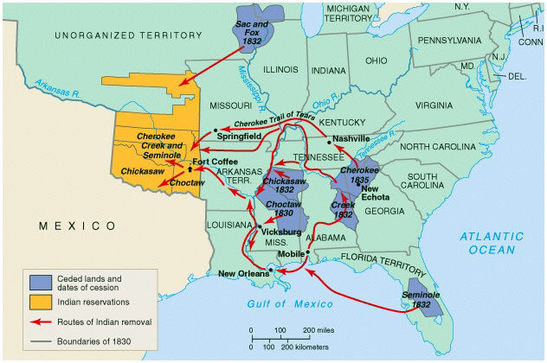 Map that shows the routes of relocation for Indians under the Indian Removal Act (Courtesy of http://jb-hdnp.org/Sarver/Maps/Indian%20removal.jpg) ( Header picture above from www.mtholyoke.edu)
Powered by